Largest Sopping Mall Once Upon A Time in Puxi, Shanghai


Founded in 1914 and completed in August 1915, this century-old building is called "The Earliest Amusement Park in Shanghai". In 1995, it was renamed "New World" and reopened, becoming the largest shopping mall in Puxi at that time. New World not only witnesses the economical progresses of Shanghai for nearly a century, but also enriches the Holiday hours of local residents, so as to contribute a precious memory for their Childhood.

After a Nine-month upgrade from March 2019 to December 2019, the 105-year-old Shanghai New World finally finished the refurbishment. This upgrade is the largest adjustment of New World since its reconstruction in 1995, and the refurbishment closely follows the design theme of "Nature·Life" and creates a brand new "urban living room" for consumers.

Light, extends the spirituality of architectures,

shows a inherited but brand new image of New World.


The interior decoration and facade renovation works were done by Shanghai Xian Dai Architectural Design (Group)Co.,Ltd. It is an honor for VF to provide the professional commercial lighting solution and high-performance products for this project. With an aim to preserve historical and cultural heritage, VF would also like to extend the spirituality of the architectures with light to present the new vitality and tension of architecture. The renovation work about the facade of New World completely retained building elevation symbols and the proportion of the most characteristic buildings. With ART-DECO decorative style combined with traditional Chinese elements, curtain glass wall uses gold lines to sketch out the palatial "Business emperor building". The light near the main entrance extrudes the attention of guests, and strives to show the heritage from the past and brand new image of the current New World. 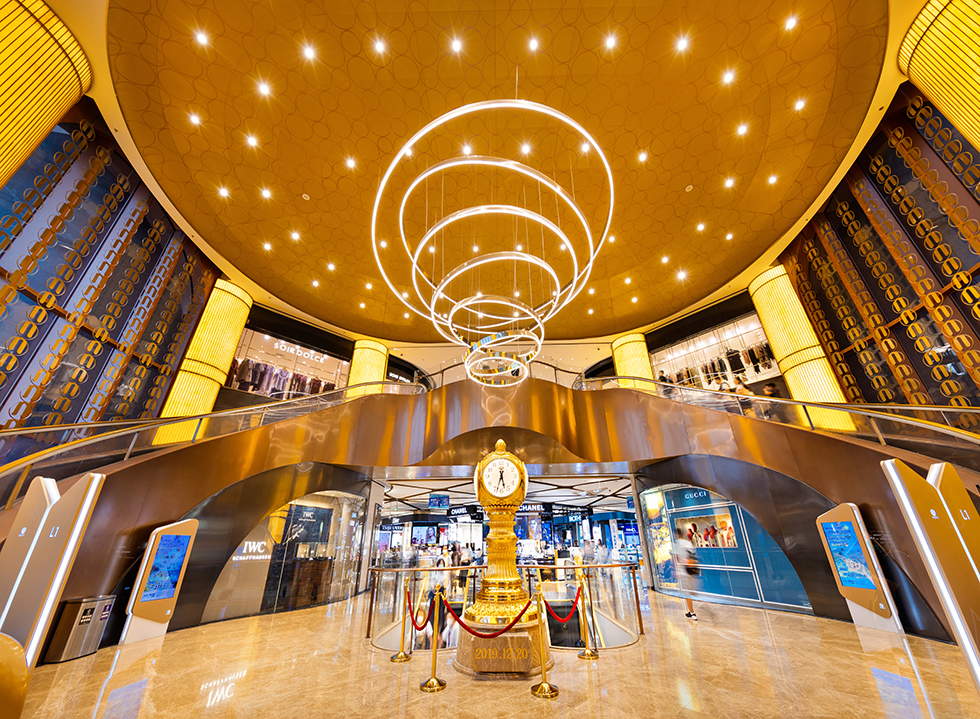 The main entrance follows up the theme of "Golden Hall". Besides of retaining the rotating escalator, the "Four-sided Clock" of New York Central Station is introduced. The seven irregularly arranged halos at the top represent the harmonious man and nature relationship over the seven continents.

The φ120mm 42W 37 degree angle recessed MAGIC series downlights from VF are used on the golden roof, 3500K warm white light balances and narrows indoor and outdoor color temperature differences, creating a warm and comfortable feeling at the entrance of the mall. With the light from MAGIC and golden pendant luminaries, the entrance is eye-catching and creates a gorgeous and elegant atmosphere. As an important area having large flow of people in the mall, luminaries within the elevator entrance should be reliable and functional. The asymmetrical φ120mm 27W 28degree recessed Magic downlights with 3500K color temperature arranged on the dome can guide the guests by the difference between darkness and brightness. The eight planets on the top of the south central hall circle the sun, forming the concept of solar system. And with the stratum around, the hall forms a concept represents the harmony between human and nature. The design is more gorgeous under the light of MAGIC. With the changes of light and shadow, you can see a wonderful starry sky. The top of the north central hall is themed with the moon, the stars are arched over the moon, and the sun in the south central hall forms the concept of coexistence of the sky and the earth. The MAGIC set on high altitude emits soft light, just like a bright moonlight, which complements the criss-cross escalators. Some MAGICs are set on the ceiling as accent lighting to soften the transition between aisles and shops, highlight products with a splendid color render to stimulate customers' desire to purchase, and the dynamic light could also create a splendid shopping experience.


The renovation will closely link the commercial spaces with historical buildings through light. The gorgeously returned New World will become the "New World" for the transformation and upgrading of Shanghai's traditional business, the "Shanghai Style" new highland for business travel and cultural experience and consumption, and also a new landmark on Nanjing Road!