The entire space adopts low-key wood color to create a easeful atmosphere and bring guests a unique dining experience from the aspects of vision, touch and smell.

Peace in the Octuple City Created by Light and Shadow 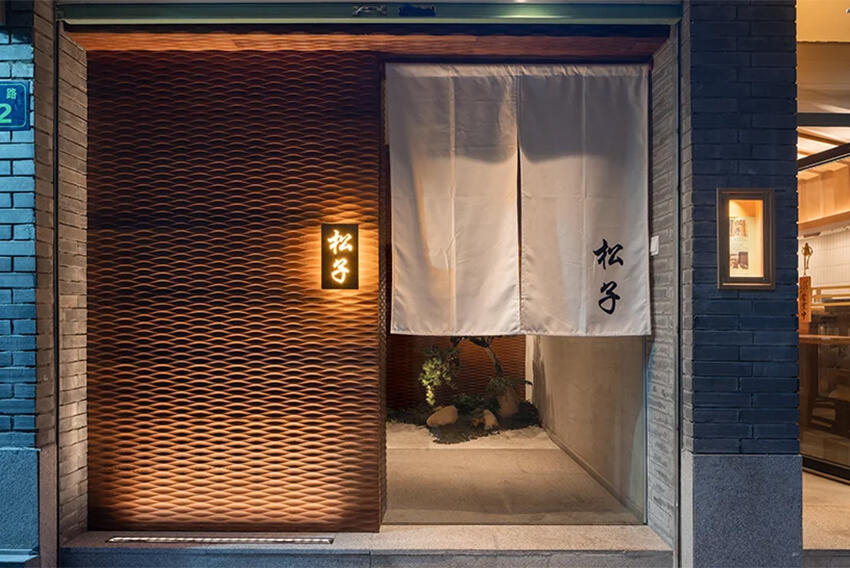 In order to isolate REYOUTEI MATSUKO from the dense crowd, the interior designer designs a unique entrance. The lintel with a LINNOU is settled in the bustling downtown without arrogance, and generates a typical element of Japanese-style. Once the the lantern is on, the shop moves under the contrast of the light and dark, making the entire entrance space charming and elegant. Combined with the light-washing effect of the MIZAR series, it creates a looming feeling and a unique feature for RYOUTEI MATSUKO. 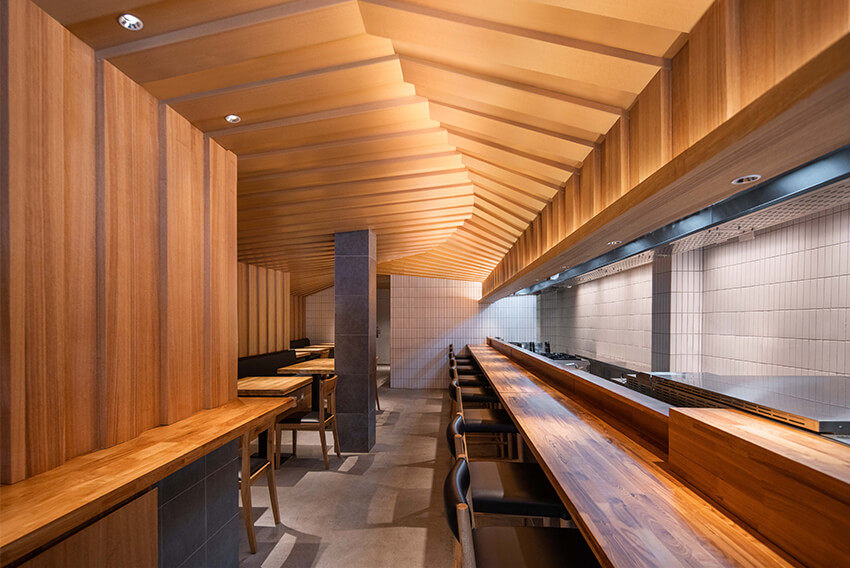 
Due to the functional requirements of the project and the limitations of the irregular first floor, it is difficult to attract the attention of pedestrians in commercial streets. Therefore, the architect uses the ‘HUNAZOKO’ ceiling (means bottom of the ship)
, which is often used in traditional Japanese architecture, to pursue changes in the plane space rather than the vertical space. As a result ,visitors can also feel the changes in a relatively low ceiling space. Additionally, the ceiling designer of the whole scheme is composed of the ceiling pattern formed by the upper and lower layers through the change of the top curve, and the part where the ceiling and the wall are connected extends down, so that the whole space wall and ceiling are integrated.

As the building is an old refurnished house with a relatively low ceiling, the height of the ceiling cannot be changed significantly. Therefore, LINNOU with φ55*72mm cut-out is used, and the precise beam hitting the dining table divides and isolates the space. LINNOU also highlights the high-quality ingredients and freshness of Japanese cuisine by its high CRI.

On the ceiling, the LINA II is hidden in the groove, which not only provides a downward basic light source, but also adds a sense of hierarchy to the light environment of the space, making the entire space open and transparent. The change of light and shadow creates a sense of flow in the space, which also gives people a step-by-step space experience and allows the space to be extended.

Art of concealment creates a deeper illusion, a conjecture beyond the beauty behind metaphor. 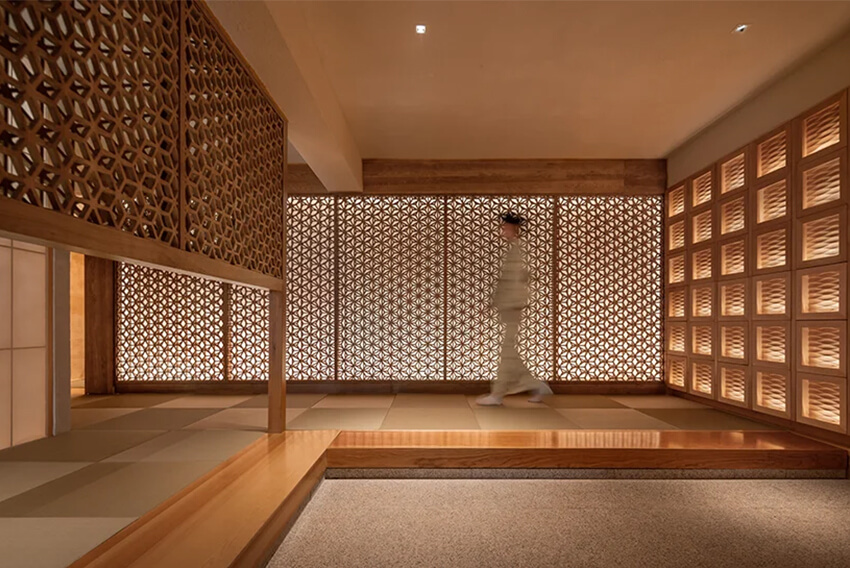 Entrance on The Second Floor


The entrance of REYOUTEI MATSUKO is located on the second floor with a low ceiling. To attract the sight of the guests, the designer disassembles the traditional Japanese ASANOHA pattern into rhombuses and equilateral triangles, and reorganizes to obtain a double-layer grid wall. On the shoe cabinet panel, the traditional Japanese engraving technique ‘NAGURI’ is processed. LINA II soft LED strips hides in the shoe cabinet, the warm and soft light is emitted through the wooden panel, as if to draw a charming painting and create a warm atmosphere and intimate space experience. 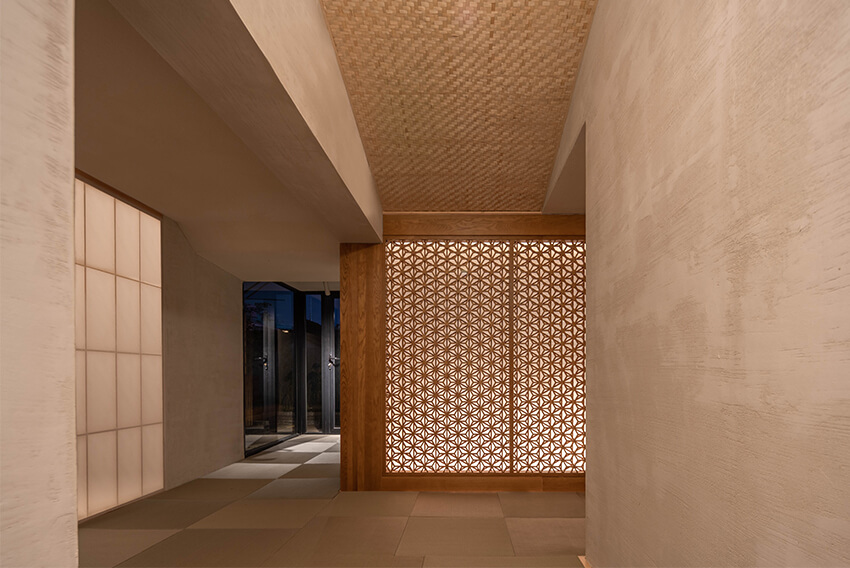 LINNOU set at the top of the corridor provides a comfortable environment for passing guests. With a faint white light falling from the ceiling, guests could have a feeling of hierarchy to the entire walkway. 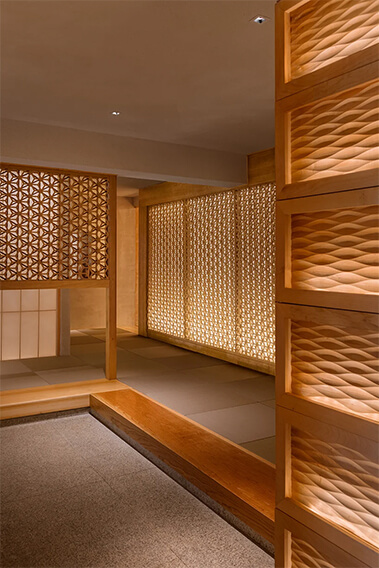 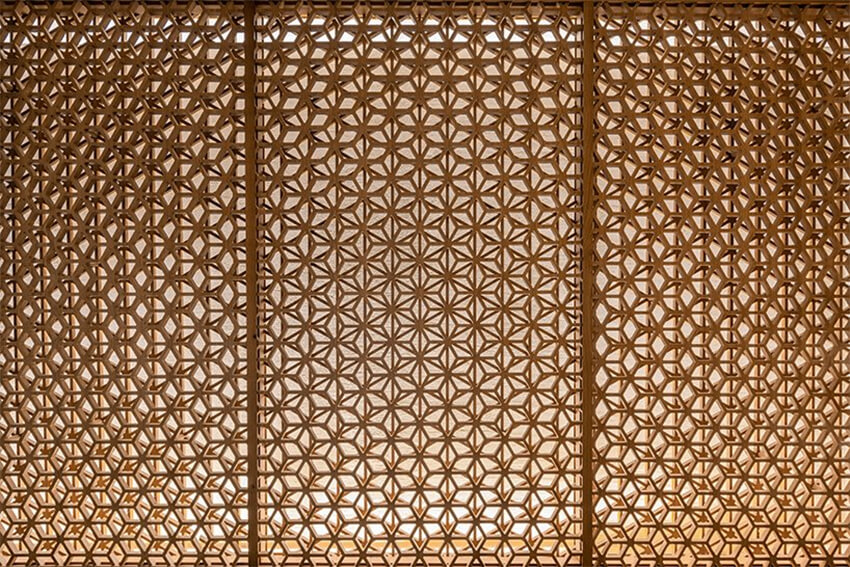 Details of The Entrance

MIZAR are embedded in the double-layer grid wall. By the wall washing effect casted by MIZAR, soft light perfectly sculpts the detailed texture of the grid wall, and enriches the internal and external interaction of the entrance space. 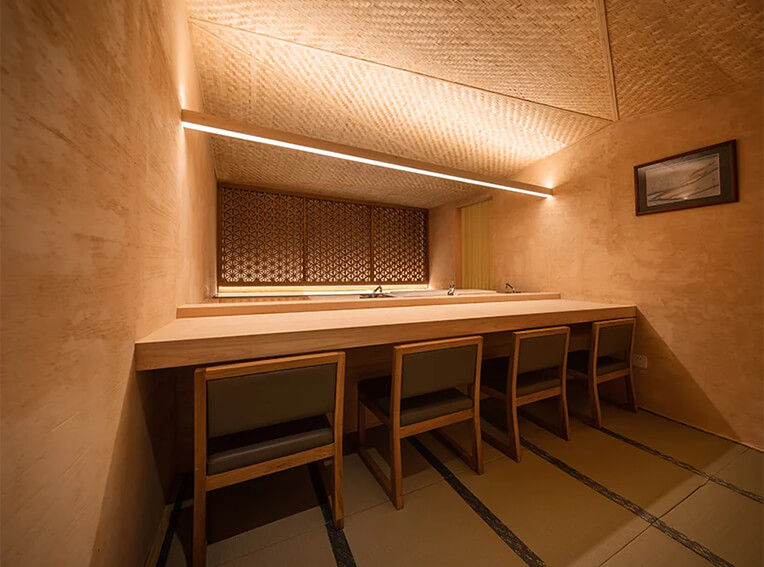 Half of the area on the second floor is composed of a private room and a sushi bar. It uses traditional Japanese taiko sheets as a partition to ensure privacy and transparency at the same time. The other half of the second-floor uses wooden grille wall elements on both walls of the hall. In order to ensure daylight while blocking the cluttered view of the neighboring street outside, the entire balcony was planted with plants and used bottom opened washi partition ‘Yukimi-shoji’.

The space is made of logs to set off the warm atmosphere. LINA II soft LED strips installed on the wooden railing create a clean and warm atmosphere, and the indirect lighting reflects the prospect of the lights. 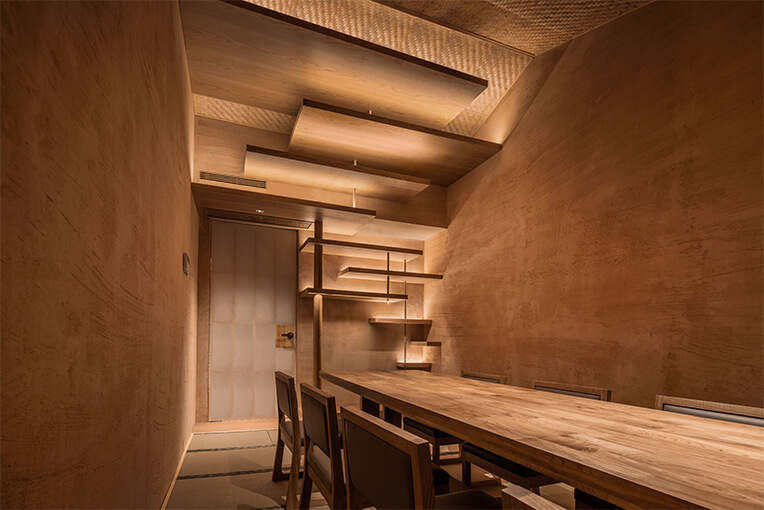 The third floor is the VIP room. The whole space is very quiet and private. In order to take advantage of the relatively high three-story ceiling, the designer designed a decorative cabinet that runs through the floor and ceiling of each VIP room, hiding the LINA II in the decorative cabinet. The diffuse reflection of the light makes the ceiling exquisite, outline the edge of the structure, and add light to the space. The technique just like hang the ceiling into the space, and spare wider margin for imagination.

Due to the light and translucent nature of the ‘Shoji’ paper, the LINNOU installed on the ceiling gives a faint sense of haze down light, ensuring the privacy required in the VIP room.

The wall of the restaurant is combined with wood and ‘Shoji’. The simple and natural decoration combined with soft lighting shows different light and shadow effects as time goes by. It seems that there is always a power in the space to make people think quietly. Makes diners more relaxed and unrestricted. Against the background of light and shadow, at a glance, it becomes poetic and picturesque. The human touch and the attachment on the tip of the tongue have become a small fortune for each diners.